From the Erzgebirge to Potosi: ​A History of Geology and Mining Since the 1500's 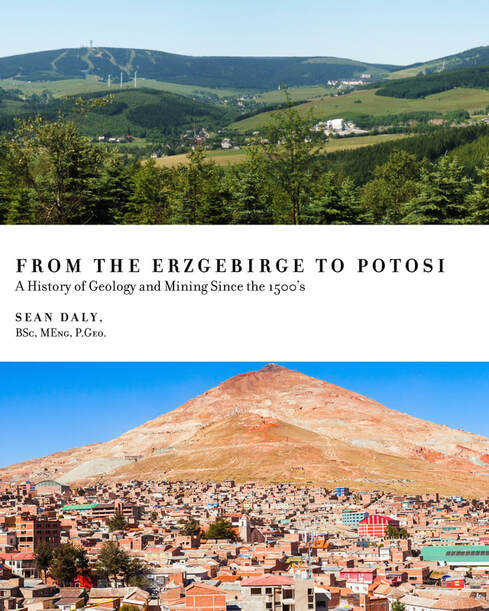 From the Erzgebirge to Potosi: ​A History of Geology and Mining Since the 1500's traces the history of mining and geology from the 1500's in the valuable silver mines of the Erzgebirge Mts of eastern Germany to the rich silver mines of Bolivia, including Potosi. With emphasis on the famous first mining geologist/engineer, Georgius Agricola who wrote his treatise on mining and smelting techniques, De Re Metallica, during the Renaissance and the contributions of some well-known geologists whose theories proliferated during the Industrial Revolution, the close connection between society and the natural sciences is examined. A major section on the engineering application of mapping at a large Canadian open pit mine demonstrates modern geological and geotechnical thinking. The powerful tools of both the miners and the geologists, dialectical and historical materialism are explained in detail in their relation to the earth's processes, the mining cycle and social redress. The environmental movement and the struggle of the miners for better working conditions and a more humane social system are discussed as is the comparison between the equitable Inca mit'a labour system and the corrupted mit'a of the Conquistadores. Richly illustrated, with 74 figures, and images of the famous scientists and maps and photographs to explain technical points make it highly readable.

You can order Sean Daly's From the Erzgebirge to Potosi from most major online retailers.

“Sean Daly, who is a very knowledgeable mining geologist with experience in both mineral exploration and mining operations, has written an excellent book on the history of mining.  His book starts in the Renaissance period with the publication of De Re Metallica by Georgius Agricola in 1556 in which the development and operation of mines at Erzgebirge in Germany were first described as a science.  The book then goes on to discuss how the work of Agricola was advanced by pioneering geologists such as James Hutton (1726 to 1779), William Smith (1769 to 1839) and Charles Lyell (1797 to 1875) who collectively developed the concepts of geological time and the formation of rock strata.  These concepts were vital to mineral exploration and the discovery of modern ore deposits, including the great mines of the Andes in South America such as the silver mines of Potosi.  Mr. Daly’s book then describes modern mining methods at the currently operating Highland Valley open pit porphyry copper mines in Canada.

Sean Daly’s book is a useful summary of the advancement of geology and mining over the past 500 years that demonstrates the importance of this industry to our modern way of life”.
​
-Duncan C. Wyllie Ph.D., well-known and respected geotechnical consultant and co-author of Rock Slope Engineering
​Review of From the Erzgebirge to PotosiPost by Nisha Ward » 30 Sep 2021, 01:30
[Following is an official OnlineBookClub.org review of "From the Erzgebirge to Potosi" by Sean Daly and Georgius Agricola.]


Mining is a complex, delicate job. There’s a science to it that requires knowledge of various fields. This includes geology, chemistry and physics. However, there’s also a rich socio-economic history to it that has shaped mines and miners into what they are today.

Sean Daly is more than familiar with these aspects, expanding on them in From the Erzgebirge to Potosi: A History of Geology and Mining Since the 1500's, written with reference to the work of Georgius Agricola. Not only does he describe the mining process in great detail in this book, but he also explores the history behind the most well-known figures of the field, including Agricola and William “Strata" Smith. Additionally, he provides context for the state of mining today through his look at the history of workers' rights in Mexico and Germany.

I’m giving this book 3 out of 4 stars. I wanted to give it a full rating, but there are so many minor punctuation errors that I had to take a star off for that. It’s an excellent book that goes into detail about the history and science of mining, yet it doesn’t become so technical as to lose the reader.

From the very beginning, this book caught my interest. Daly has a style that’s both vivid and educational, but it doesn’t get so lost in the details as to become overly didactic. For a book like this that relies on a lot of information being related at once, that was a definite plus. It made it easier to read and digest what was being said without getting lost.

Furthermore, his inclusion of both illustrations and photographs helped to shed light on the subject. It’s one thing to read a description of mining processes and geological features, but another thing entirely to actually see them. The former can only do so much, while the latter gives you an idea of what you’re reading about.

The above reasons are why I gave it my rating, but I would be remiss if I didn’t mention the aspects of the book I didn’t like. The organisation, for example, left something to be desired. While I liked reading about the scientific processes behind mining, I would prefer not to have it in between the biographies of men like Agricola and the history of strikes in Potosi and Erzgebirge. This made it harder to appreciate the work that Daly puts into making sure it’s understandable to the average layperson.

I also didn’t like that the illustrations were often placed at the end of the chapter instead of where they’re referenced. By the time I got to them, I would have forgotten the references that were made to each figure.

That being said, I think this is a good book for anyone with interests in history and geology, and I definitely recommend it to them. It’s detailed, but not incomprehensibly so, and you can tell that Daly has a passion for the subject, in addition to his own involvement in the field.